This page will provide detailed information on three P-51B Mustangs and their pilots that ended up in Switzerland during World War 2 and were interned for the duration.

Special attention will be given to the only P-51B that landed intact and subsequently was test-flown by the Swiss Air Force and the Swiss Aircraft Industry.

We will also give a short overview of other incidents where Mustangs played their part, especially the shoot-down of two Swiss Messerschmitt Bf-109E's by USAAF Mustangs in September 1944.

On 18th March 1944, formations of heavy bombers were attacking indutrial targets in the Munich area. The famous 4th Fighter Group from Debden with its red-nosed Mustang fighters was ordered to provide target withdrawal support for the bombers after their bomb-run.
Col. Donald J. Blankeslee led the ‘Debden Eagles’ that day and the three squadrons took off at 1140 hours. Arriving in the target vicinity, the 334th Fighter Squadron spotted a gaggle of Messerschmitt Me-109’s and immediately gave chase. Among the pilots was Lt. Ralph Kidd Hofer, an aggressive pilot who succeeded in shooting down two Messerschmits to become an ace with 5 aerial kills. After Hofer had downed the second enemy fighter, his Mustang (his assigned plane, a P-51B-5-NA, serial 43-6946, coded QP-L) suffered from a runaway-propeller which caused extremely high r.p.m.’s in the engine. Unable to continue the fight, Hofer set course for neutral Switzerland at 6’000 feet. After passing Lake Constance and crossing into Swiss territory, Hofer started to climb up to bail out. After jettisoning the canopy and standing up on the pilot’s seat, the propeller suddenly came back to normal position. Hofer thus stepped back into the cockpit, began calculating on the remaining gas and decided that he possibly could make it back to England. Lucky Ralph Hofer landed at Manston airfield with only 6 gallons fuel left in his tanks. Throughout the whole journey back home he had to endure an uncomfortable ride due to the lack of his canopy and icy winds whipping around the cockpit. 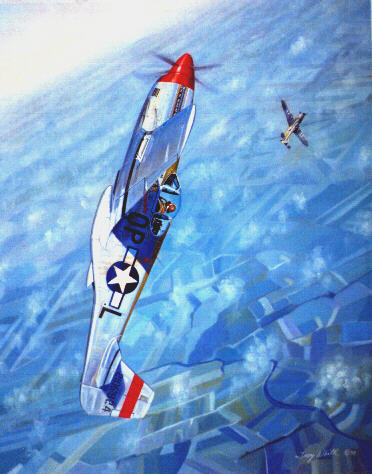 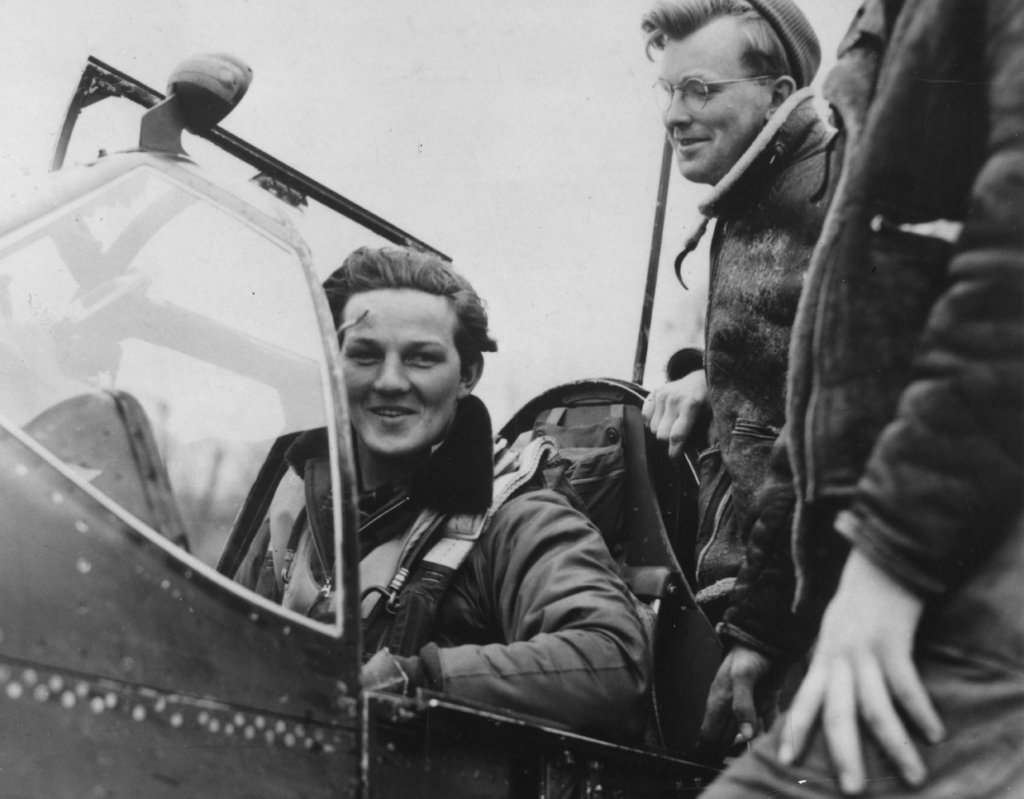 Lt. Ralph Kidd Hofer went on to become one of the highest scoring pilots in the ETO with 15 aerial and 14 ground kills, but unfortunately was shot down and killed by ground fire on 2nd July 1944 near Mostar, Yugoslavia.

And the Swiss Air Force had to wait for another 70 days to see the arrival of the first North American P-51 Mustang.

On 27th May 1944, 930 heavy bombers from the 8th USAAF took off from their bases in England to attack important industrial targets in central Germany. They were escorted by 710 escort fighters of the types P-38 Lightning, P-47 Thunderbolt and P-51 Mustang in order to prevent the bombers from being attacked by German fighter planes. Main target for 150 Boeing B-17 bombers of the 1st Air Division was Ludwigshafen. Assigned escort was the famous 357th Fighter Group ‘Yoxford Boys’ with their P-51 Mustangs. For the men in their fighters with yellow/red checkered noses this was Mission #65 and the unit was led this day by Major Irwin H. Dregne. Shortly after R/V, the bomber formation was attacked by approx. 60 Focke-Wulf FW-190’s and Messerschmitt Me-109’s which managed to shoot down several bombers from the lead formation. Although the 357th FG immediately went into action, they could not disperse the enemy fighters on time. The ensuing battle between the German fighters and the Mustangs resulted in the downing of 14 German planes. Lts. Cyril Conklin and Thomas Harris managed to destroy two planes each before being hit, too. Both had to bail out of their disabled Mustangs and spent the rest of the war as POW’s. Lt. Dean Post was fatally wounded and perished in the crash of his plane. 23 years old Capt. Robert D. Brown from Chicago, IL, a veteran and original member of the 357th Fighter Groups’s 362nd Fighter Squadron scored his 3rd aerial victory that day, but his aircraft was hit, too, and received heavy damage to the elevator controls. The Merlin-engine also was damaged by debris form Brown's victim. A return to his home-base in England was out of question and he therefore set course for neutral Switzerland. He crossed the northern Swiss border near Lake Constance but decided to wait with bailing out of his stricken aircraft because he feared to land in German territory. After some time the Mustang became almost impossible to control and the engine started to overheat and loose coolant, so the pilot jettisoned the canopy and turned the Mustang on its back to bail out, but the inflatable dinghy pack somehow got stuck in the cockpit. It took Brown several attempts to free himself from his mount, which then went into a steep dive and crashed in the vicinity of Lütisburg. The Mustang totally disintegrated upon impact in a meadow close to a restaurant and only bent and scorched remains were scattered over a wide area.
In his struggle to abandon the Mustang, Brown had hit the elevator and suffered a broken leg. Saved by his parachute, he landed in a tall fir tree and had to be rescued by local people. He was brought to a nearby hospital where he immediately saw medical treatment before being interrogated by Swiss authorities. Capt. Brown spent the rest of the war in internment. He returned to England in October 1945 by ferrying another interned Mustang from Dübendorf Airfield back to BAD 1 Burtonwood, but only after buzzing the town of Zurich at very low level. 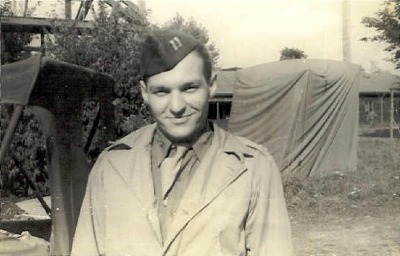 The Mustang Capt. Brown flew on this mission was his assigned aircraft, an olive-drab P-51B-5-NA with serial 43-6556. This particular aircraft, equipped with a Packard Rolls-Royce V-1650-3 engine was rolled out from the NAA plant at Inglewood, CA, on 22nd October 1943 and after a test-flight was ferried to Newark, NJ, where the plane saw some modifications before being sent to the ETO. It was then dismantled, crated and loaded aboard a freighter which left the harbour on 14th December 1943. Arriving in Blackpool, England, after the Atlantic crossing in January 1944, the plane was reassembled at BAD 2 Warton before being issued to the 357th Fighter Group. Arriving at Army Air Force Base F-373 Leiston, the Mustang was assigned to the 362nd Fighter Squadron and received the code G4-B. Capt. Brown soon personalized his newly assigned plane by applying the nickname ‘Chicago Gun Moll’ on the left cowling (see photos). 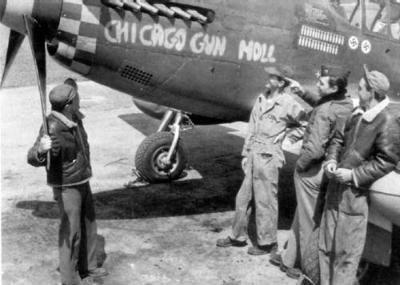 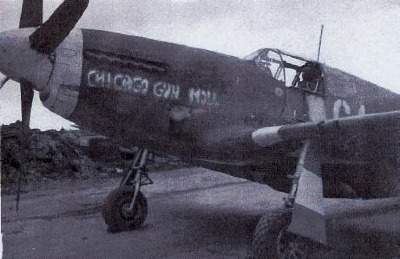 An early photograph of 'Chicago Gun Moll', before the introduction of the 357th Fighter Group's distinctive red/yellow checkered nose-markings.

Upon his return to England, Brown was given command of his old outfit, the 362nd Fighter Squadron, 357th Fighter Group, which by that time had deployed to Germany as part of the Occupational Forces and was based at R-85 Neubiberg Airfield ‘Camp Rattle’. He held this command until February 1946, when he finished his tour of duty and returned home. Unfortunately, Capt. Robert D. Brown died shortly after his return due to unknown reasons. 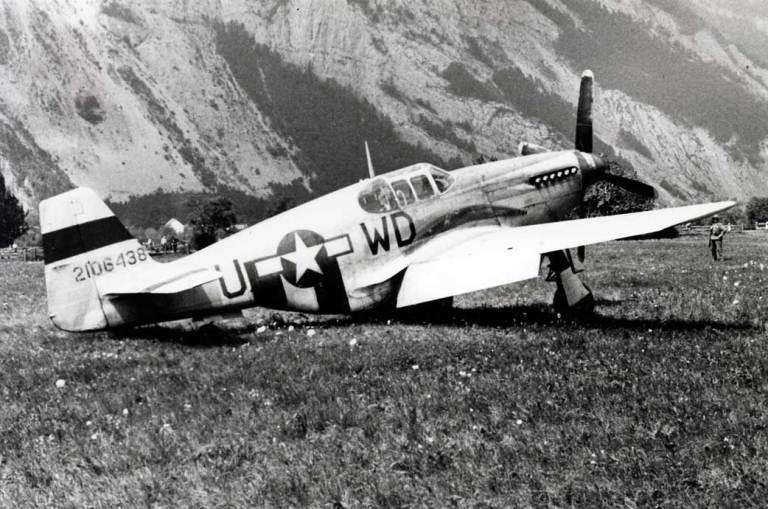 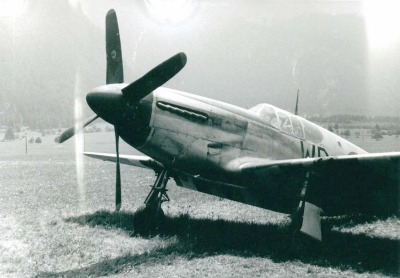 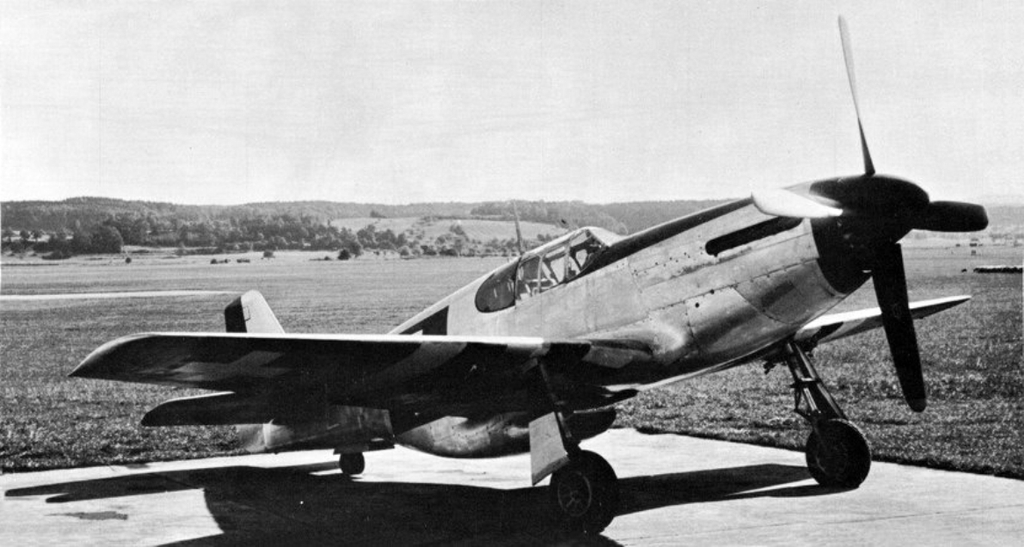 The a/c is seen here at Dübendorf Airfield 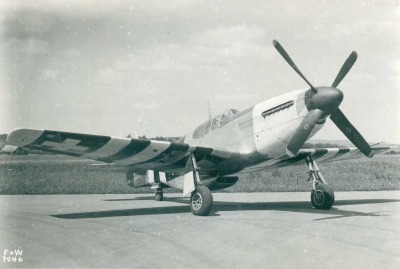 coming soon: The story of how of a tragic incident where two 339th FG Mustangs jumped a pair of Swiss Me-109's that were escorting a crippled heavy bomber to Dübendorf airfield. Oblt. Paul Treu was shot down and killed, Oblt. Heiniger managed to crashland his crippled aircraft at Dübendorf Airfield.

Here I will show the 'other side of the coin', i.e. the one of the USAAF pilots, too, because the Swiss version of the story has been told many times since this incident happened, but some important facts always were deliberately left out ! 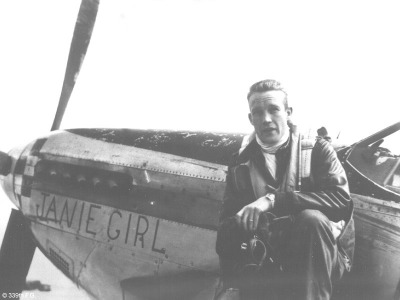 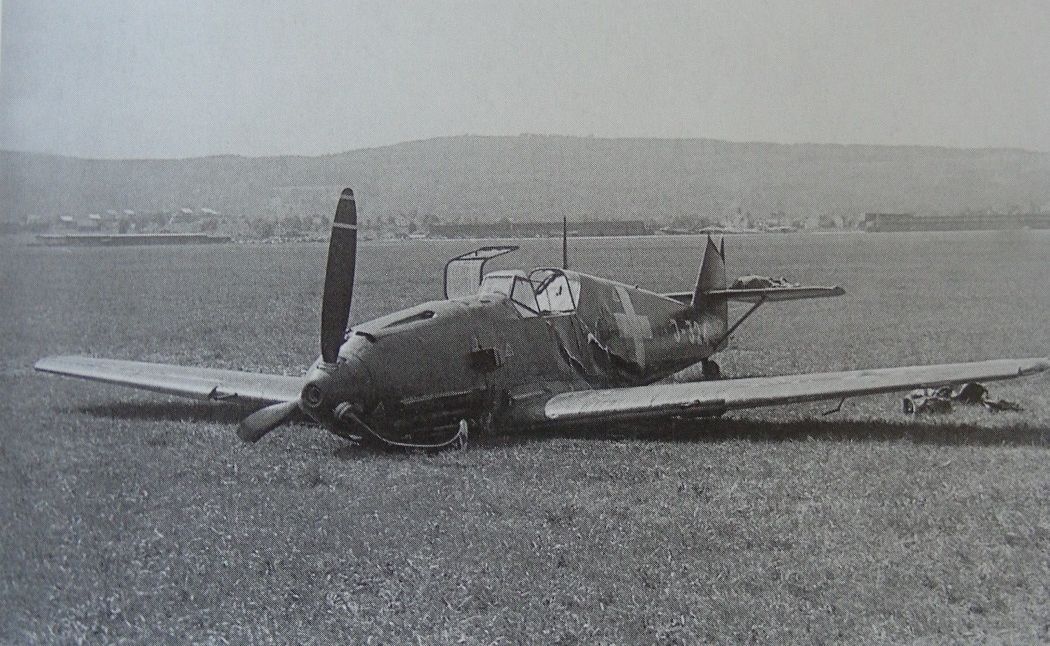 One of the victims, Me 109E J-324 after the crashlanding at Dübendorf Airfield (Oblt. Robert Heiniger).

coming soon: The story of the third Mustang, an Italy-based example received by courtesy of the 52nd FG, to end up in Switzerland; another interesting bird, but unfortunately bent and battered - mere scrap. 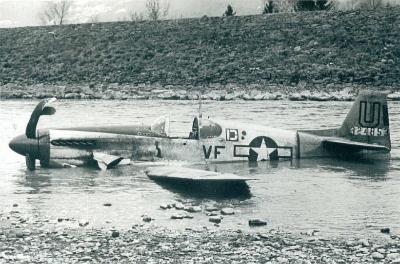 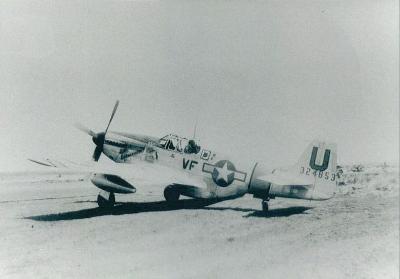 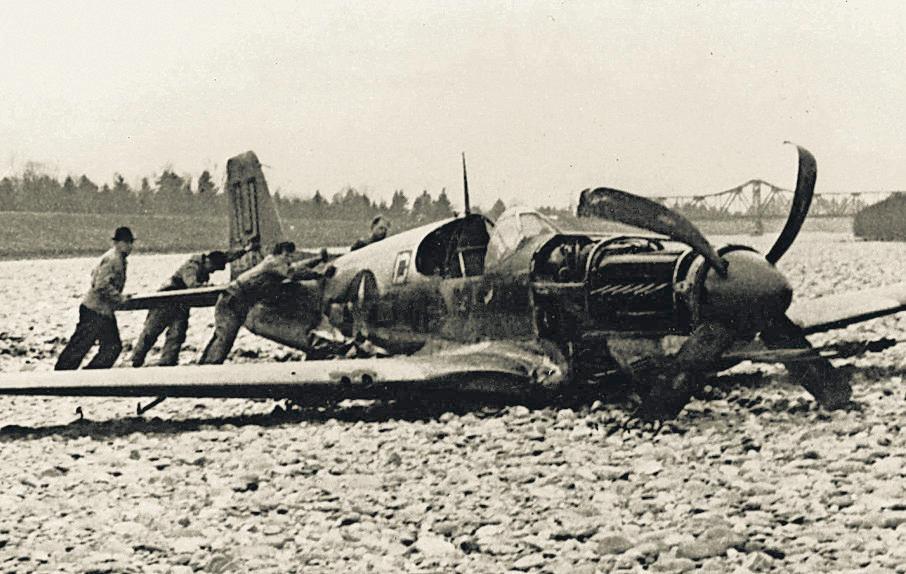 Salvage operation in process - the a/c reportedly was shipped by rail to Dübendorf Airfield and scrapped in May 1945, but substantial parts were given to FFA Altenrhein for evaluation (see below): 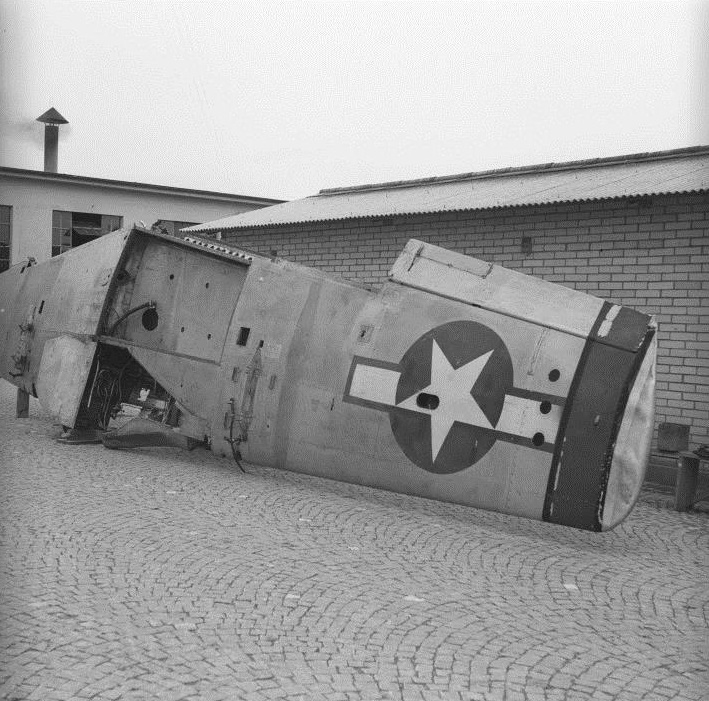 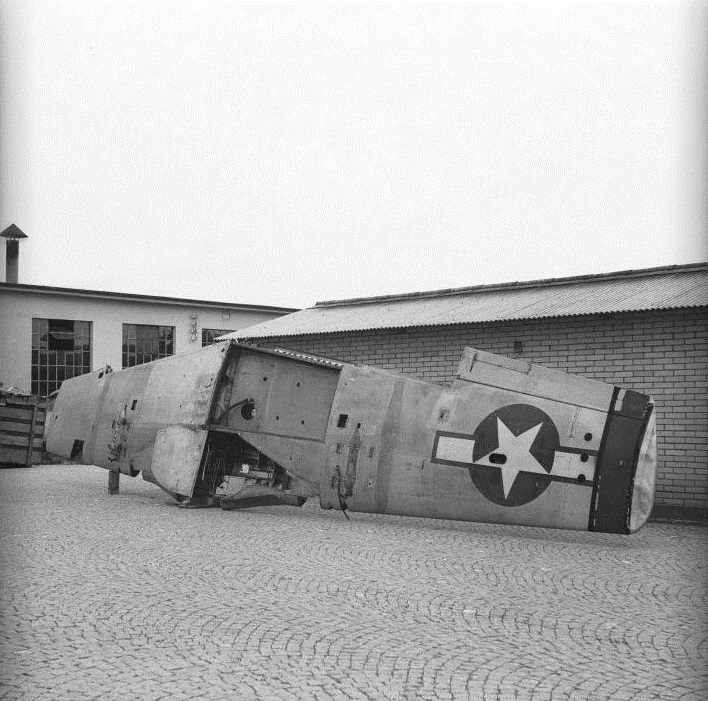 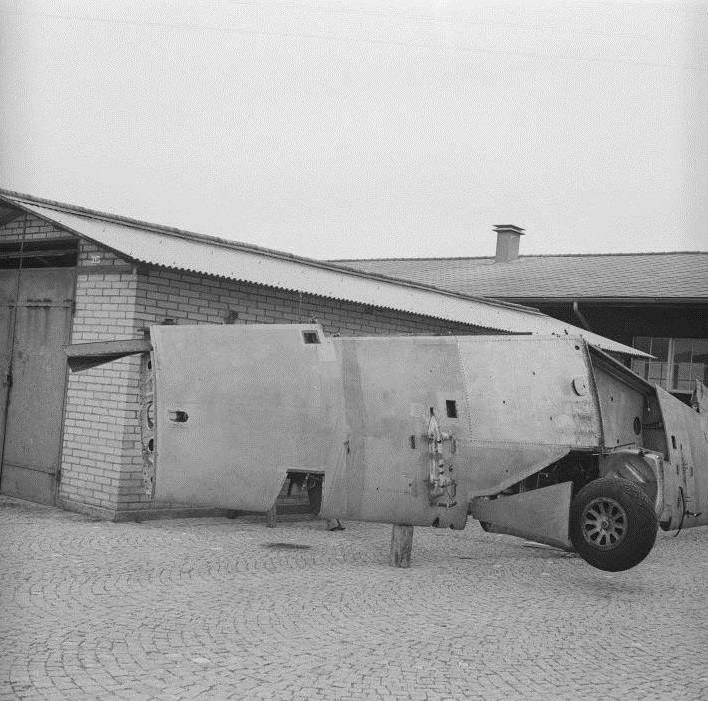 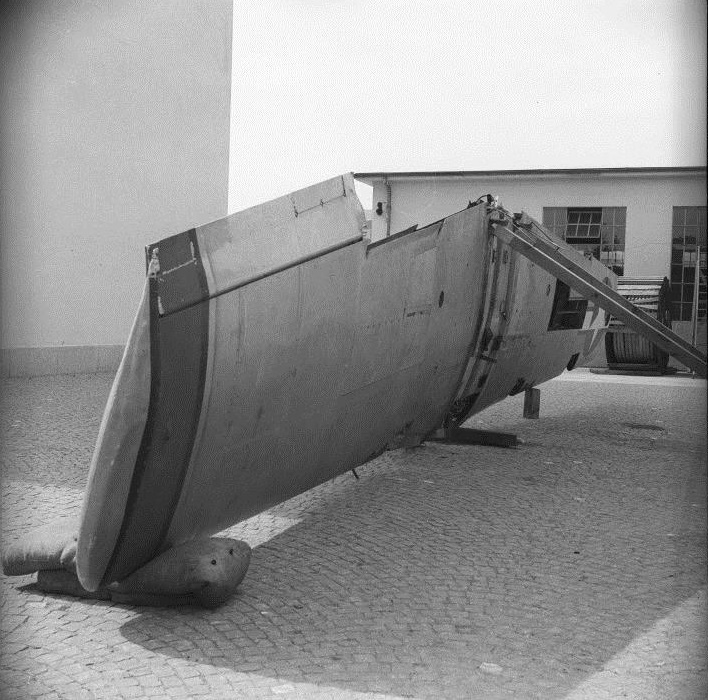 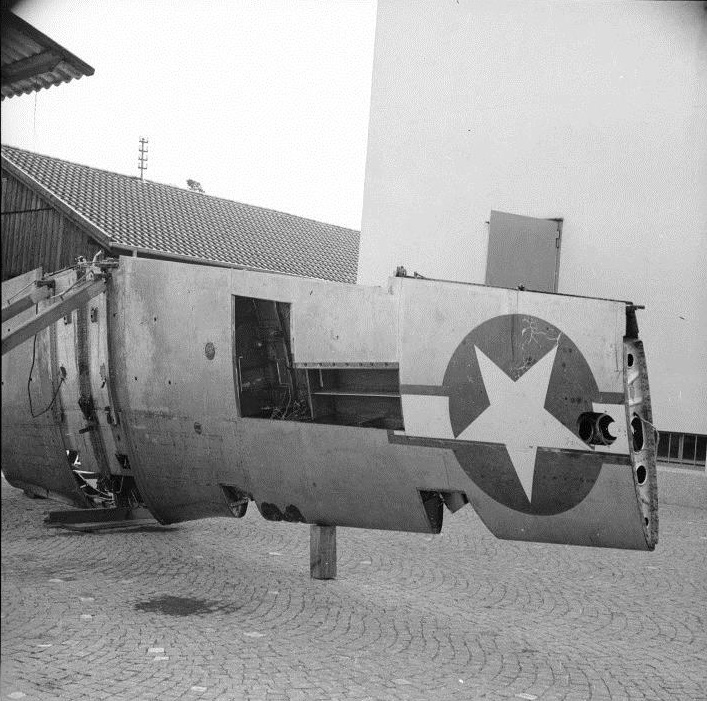 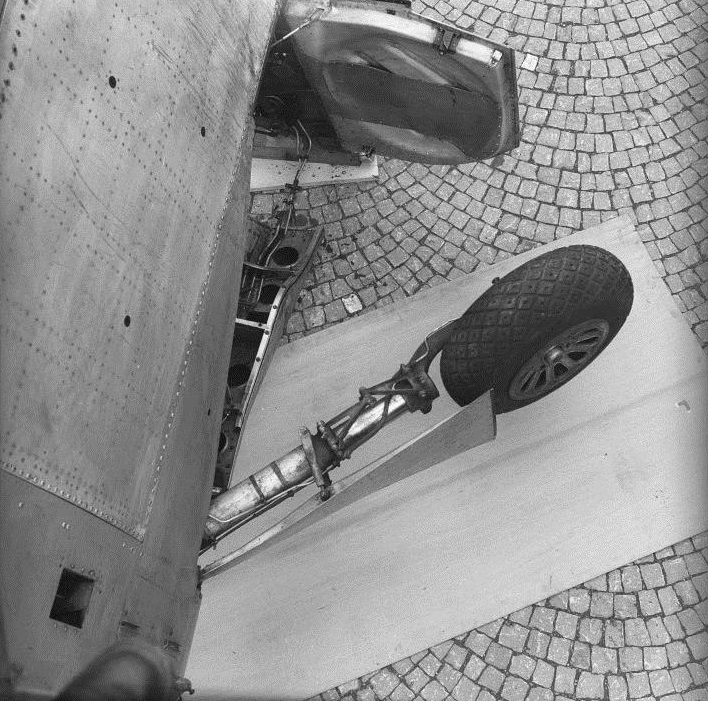 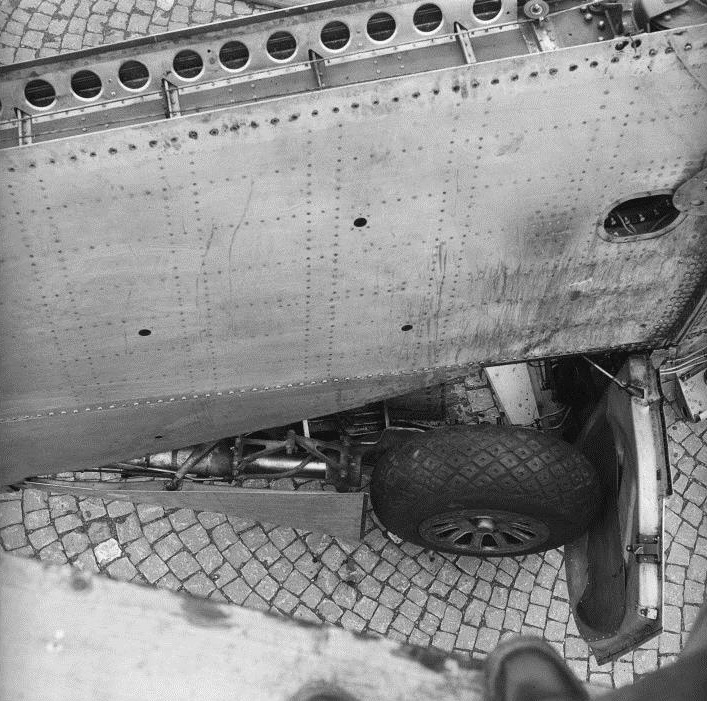 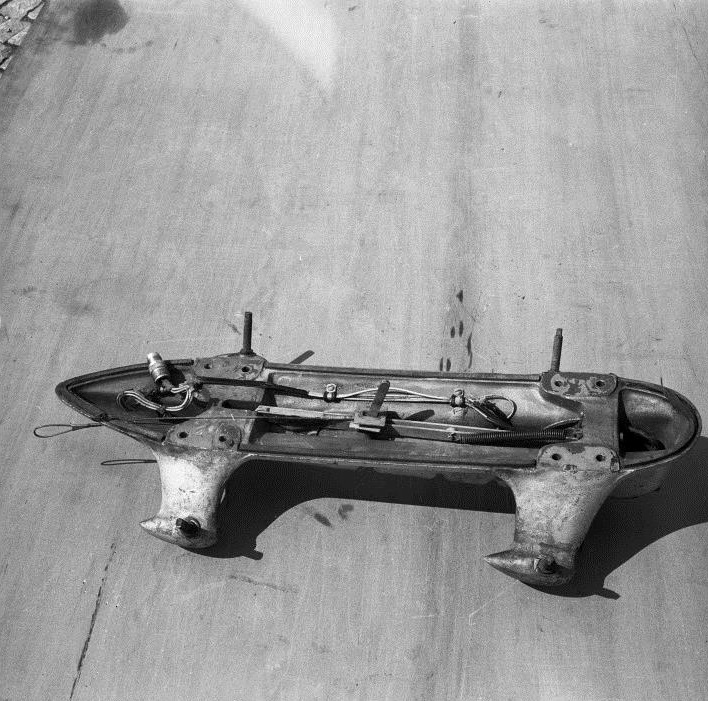